A Deep Dive into Basis Periods with Paul Aplin OBE

Back in December 2021, we invited Paul Aplin OBE to share his thoughts on basis periods. Here, Paul recaps the talking points from that webinar and looks at what’s changing and what you need to know.

This blog is based on the rules as we currently understand them (at the time of writing, the Finance Bill is
still in passage through Parliament). It is recommended reading for anyone wishing to join our
follow-up webinar, in which we will answer some of the questions you raised and dive even deeper
into the reforms. You can book your spot here.

In the transitional year especially, there will be many possible permutations and each case will need to be considered on its particular facts.

What’s changing, why, who will it affect and when?

Currently, unincorporated businesses are taxed on the profit of the accounting period ending in the
tax year (subject to special rules for the opening and closing years of a business).

In the October 2021 Budget, the Chancellor announced that these rules would be reformed. Under
the new regime, unincorporated businesses will be taxed on the “actual” profits of the tax year,
established by time apportioning all sets of accounts which relate in whole or in part to the tax year.

The change aims to eliminate “overlap profits” and align tax payable more closely with the actual
profits generated in a tax year. The government regards this as a simplification measure.

The effects are best illustrated by looking at some examples.

The simplest situation is a business with a 31 March year end (the situation would be the same for a
5 April year end as under the new rules, unless the taxpayer elects otherwise, year ends from 31
March to 5 April are treated as coterminous with the tax year end). 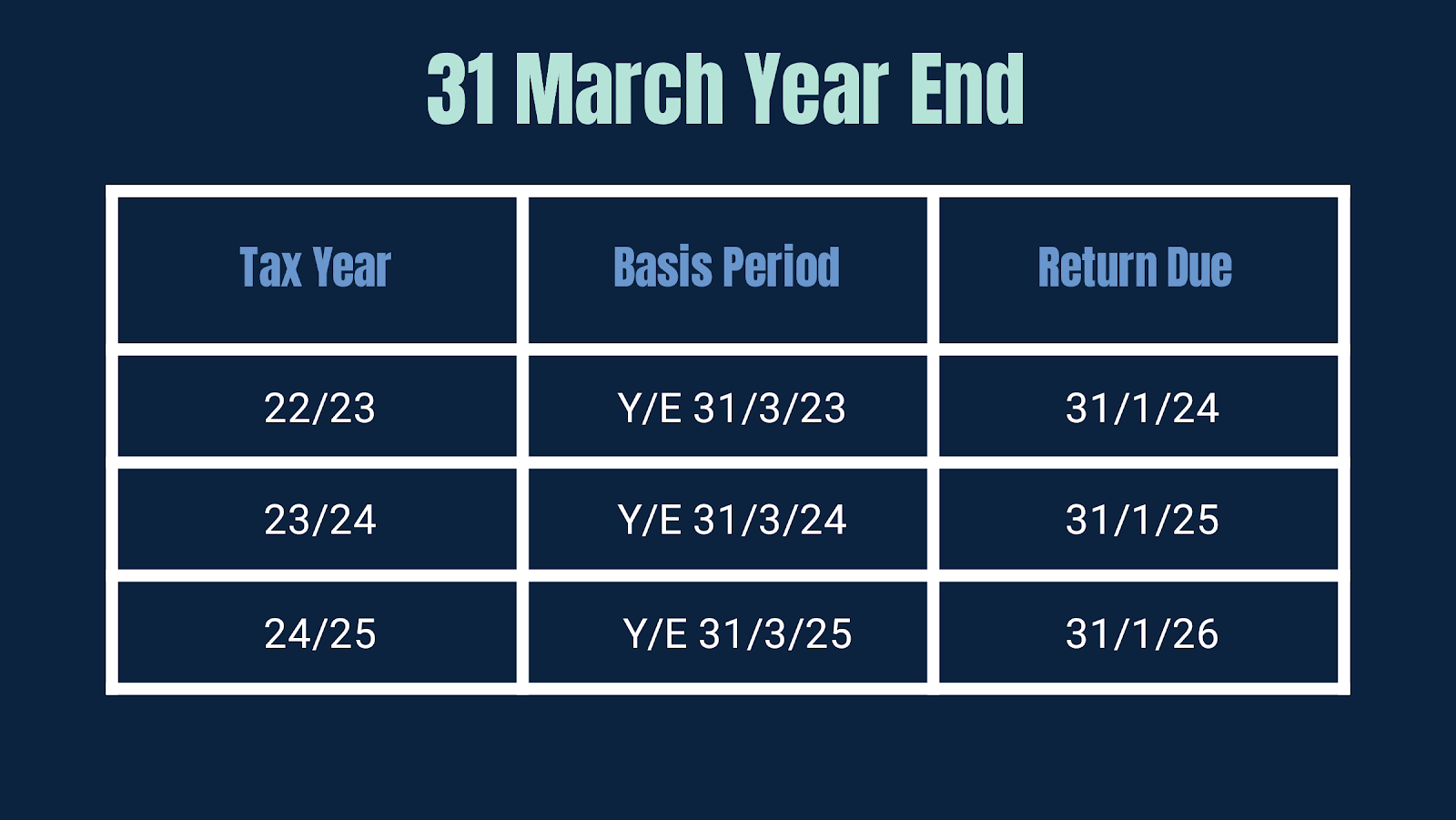 HMRC estimates, however, that 578,000 unincorporated businesses have year ends outside the
range 31 March to 5 April. Under the new regime, instead of being taxed on the accounts for the
year ending in the tax year, they will be taxed on the “actual” profits of the tax year, which will
involve apportioning two years’ accounts. The next two examples illustrate this.

The transitional year (2023/24) is taxed on a mixture of three elements as shown in the table. This
can lead to a number of possible outcomes, from additional profit to overall loss. 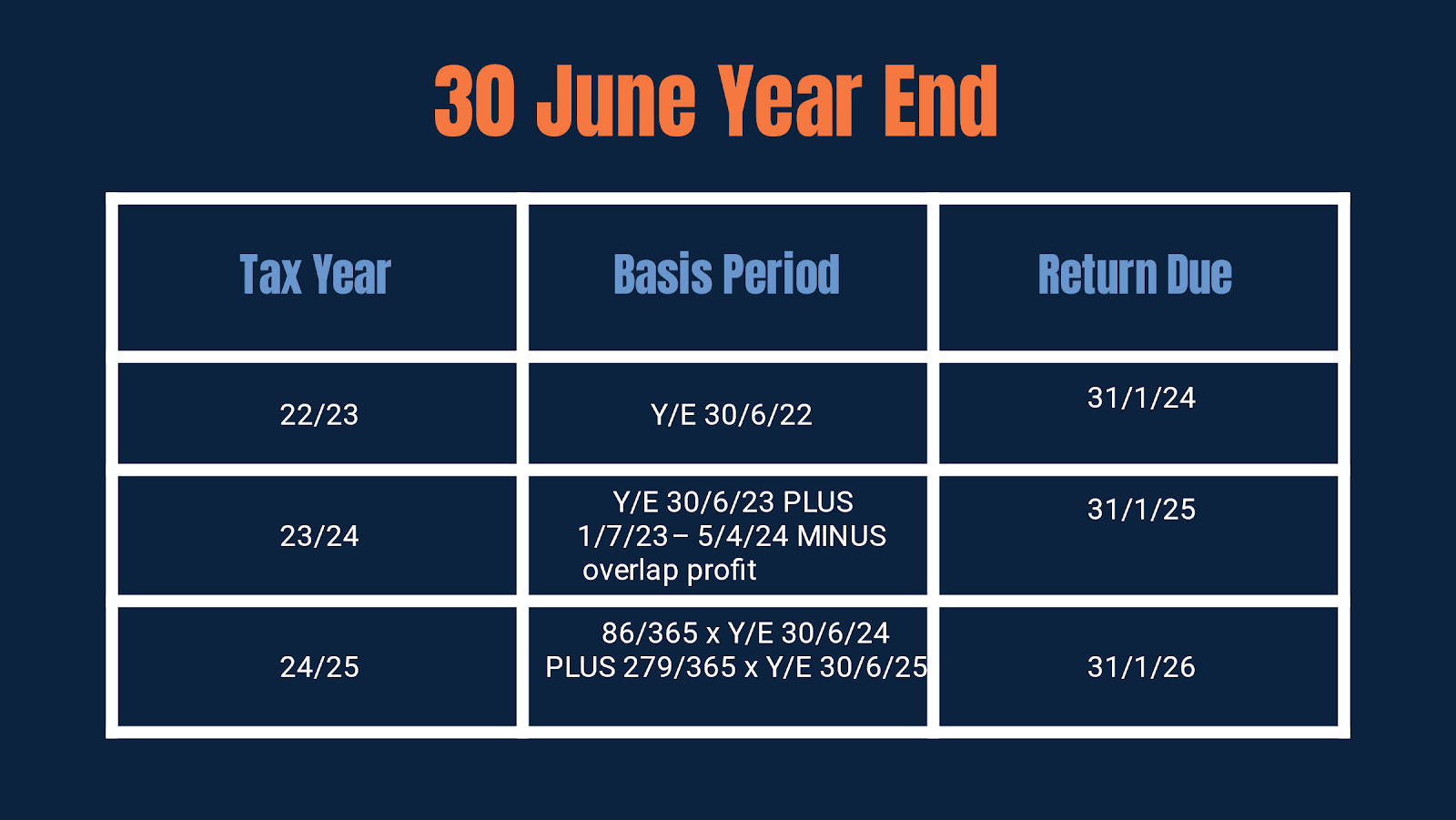 The third example uses a year end of 31 January. Again, you can see the potential complications in the transitional year and that for 2024/25 the taxable profit is arrived at by apportioning two years accounts.

There is a further problem in this example though. The second year in the 2024/25 apportionment ends on 31 January 2026 – the day that the relevant tax return or End of Period Statement (EOPS) has to be filed with HMRC. As the second year’s profit will not be known at that point, it will have to be estimated.

The same problem will arise for 28 February year ends and – in practice – 31 December and probably 30 November and 31 October year ends as well. In fact, in any case where it will be difficult or impossible to prepare the accounts and for the client to approve them by 31 January. HMRC estimates that 278,000 businesses will be in this position. 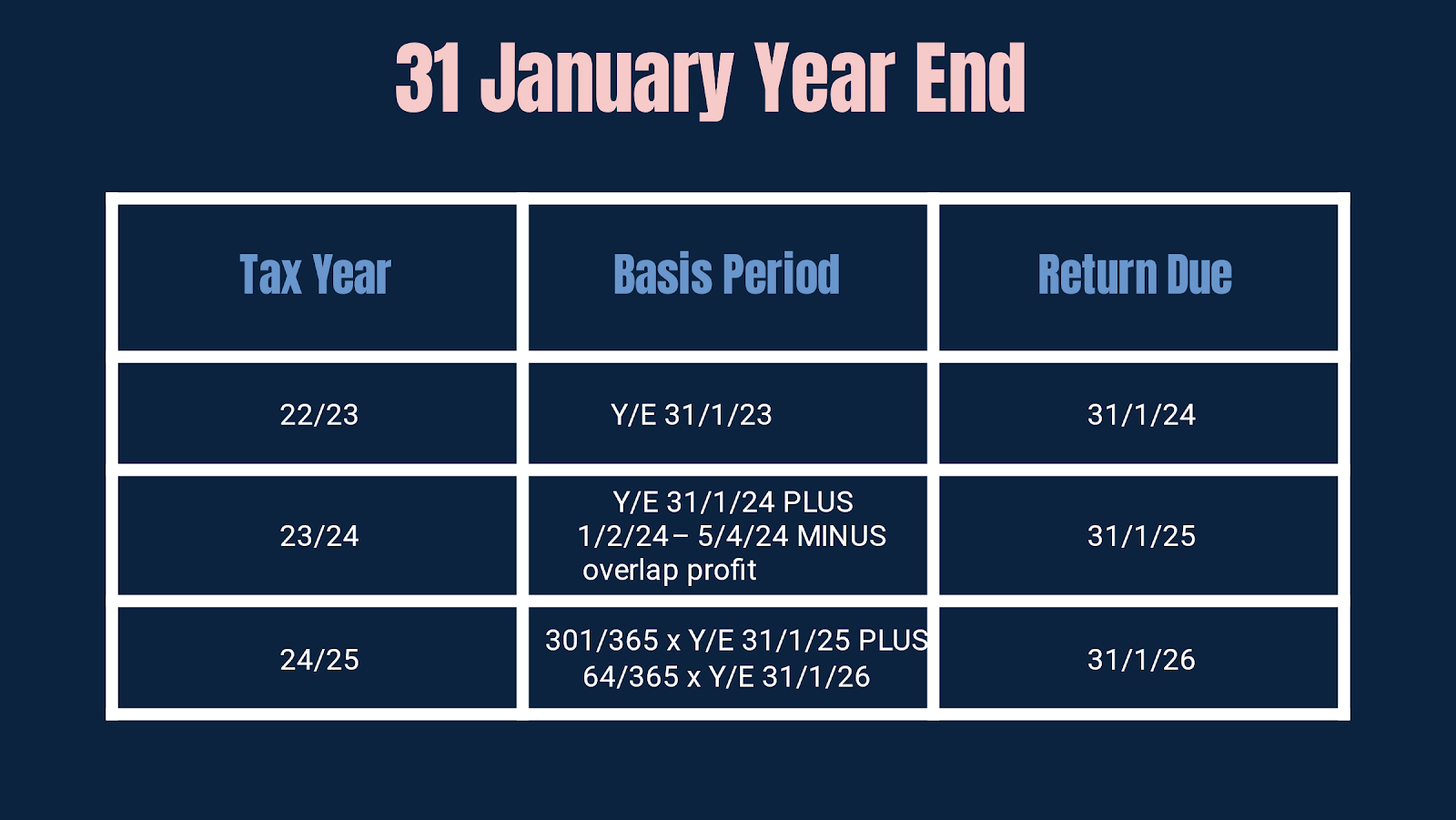 The word “actual” is in inverted commas for a reason: Time-apportionment doesn’t necessarily deliver an actual result. Take the 30 June year end example. If the business is losing money through most of the year to 30 June 2025 but has a substantial, profitable sale on the 30 June 2025 itself, a proportion of that profit will be taken into the 2024/25 tax year even though the transaction giving rise to the profit falls wholly outside the tax year. The new regime might take us closer to matching tax and profitability, but will not necessarily tax the actual profits of a tax year.

The problem illustrated by the 31 January year end example will of course arise every year under the new regime. HMRC is looking at a number of possible solutions:

As we have seen, there are three elements to be considered.

The first is the standard element, the profit shown by the accounts that would have been taxed under the existing basis (the year to 30 June 2023 in the second example above).

The second is the transitional element, the period from the end of the standard accounting period to the end of the tax year (1 July 2023 to 5 April 2024 in the second example above).

There will also be a third element, the overlap profit brought forward.

A terminal loss can be spread back three years.

If the transitional profit less overlap profit is positive, that amount can be spread forward over five tax years.

If the trade ceases before the end of those five years, the whole remaining profit is brought into the final year.

The taxpayer will be able to elect for more than 1/5 of the excess profit to be taxed in a particular year (triggering a recalculation of the remaining excess profit).

Farmers’ (and artists’) averaging calculations will not be affected.

The excess profit could have unintended consequences on, for example, High Income Child Benefit Charge (HICBC).

To avoid this, two calculations have to be performed:

Minor – and not so minor – details

31 March and 1, 2, 3, 4 April year ends are treated by the legislation as being 5 April year ends. Any profit or expenses accruing in the period after one of these year ends, but before 5 April is effectively dealt with in the next tax year. This can be overridden by election.

There is some uncertainty over enquiry windows: if two years accounts are relevant to a tax year, presumably both must remain open.

In every case where the accounting period is not coterminous with (or treated as coterminous with) the tax year, consideration will need to be given to whether to change to a fiscal year end and if so, when. In many cases there will be a good reason for having a non-fiscal year end (perhaps where there are strong seasonal factors such as in hospitality and farming or where there are overseas connections), but in others there will be no strong reason.

It is likely that many businesses will change to adopt 31 March or 5 April year ends to avoid the complications involved in estimating results or time apportioning accounts and to dovetail with the MTD quarterly reporting dates which will be based on tax year quarters (5 April, 5 July, 5 October and 5 January).

Each case will have to be judged on its own merits and with regard to the actual results for the years affected.

We’ll be digging even deeper at our next webinar on March 1st. We’ve invited Paul back to answer some of your most pressing questions and discuss what’s to come. If you’d like to join us, simply click the ‘book your spot’ button below. We look forward to seeing you there.